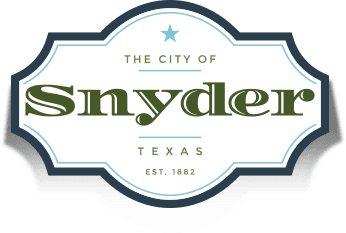 The City of Snyder - Past and Present

Snyder (the county seat of Scurry County) is at the junction of U.S. highways 84 and 180, 87 miles southeast of Lubbock in the central part of the county.

It had its beginnings in 1878 when a buffalo hunter and trader, William Henry (Pete) Snyder (a native of Pennsylvania) built a trading post on the banks of Deep Creek. Other hunters were attracted to the post, and a colony of buffalo-hide dwellings grew up around it. These dwellings, as well as the occasionally dubious character of their inhabitants, gave the town its first names, "Hide Town," and "Robber's Roost."

In 1882 Snyder drew up a town plan and invited immigration. The first public school was established sometime that year. In 1884, when Scurry County was organized, Snyder's settlement was chosen as the county seat. Snyder remained a farming and ranching community until 1948 when oil was discovered on the Canyon Reef formation north of town. Within a year the population jumped from around 4,000 to over 12,000 and a tent and trailer city sprang up on the town's northern edge. The boom was over by late 1951, and the population (which had peaked at around 16,000) stabilized at 11,000.

Scurry County became the leading oil-producing county in Texas as the result of a locally developed method of injecting carbon dioxide into the formation to increase the pressure and thereby increasing the yield. Ranching and cotton farming also continued to employ a large part of the population.